Hypotheses of a Lost Fragment 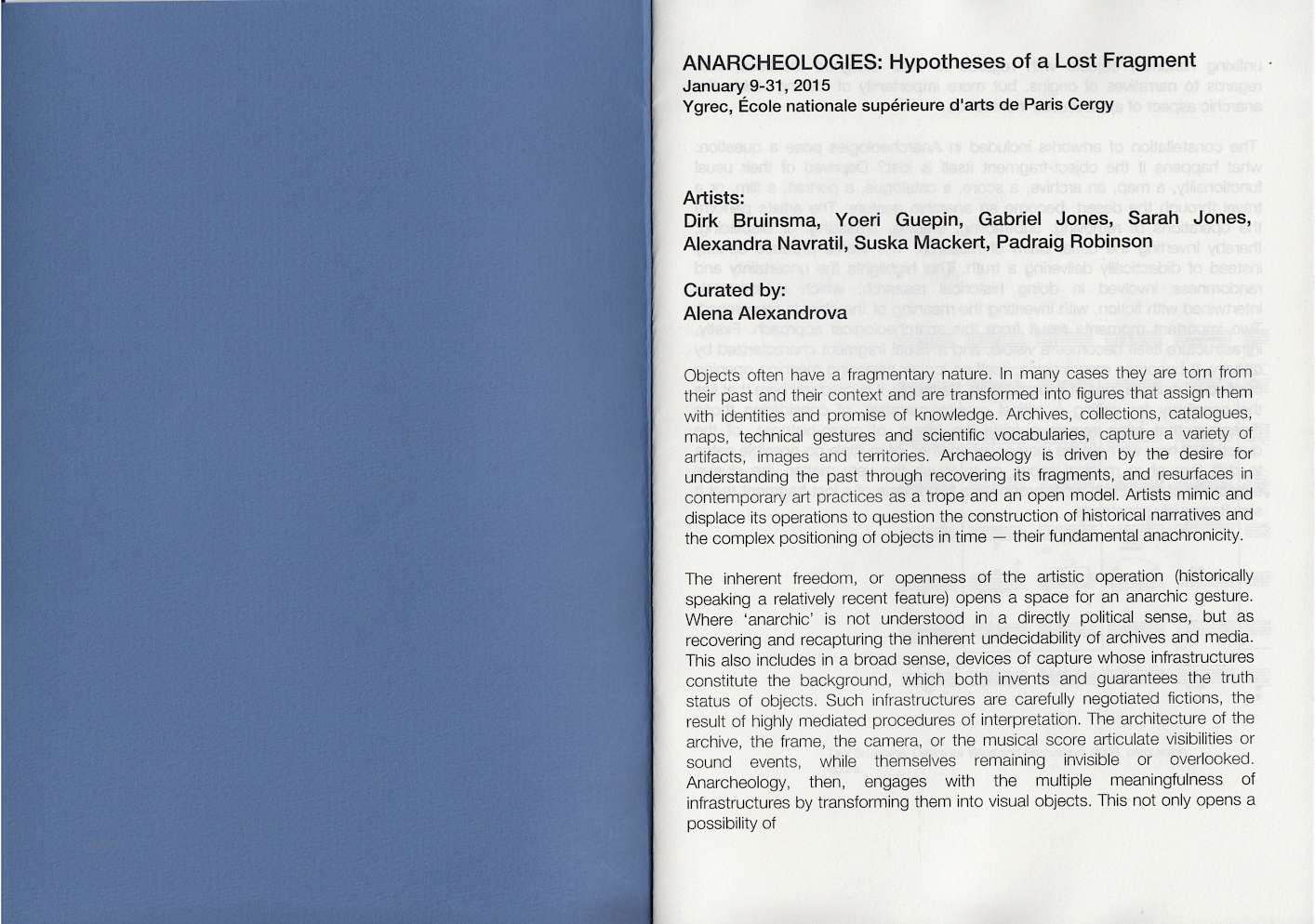 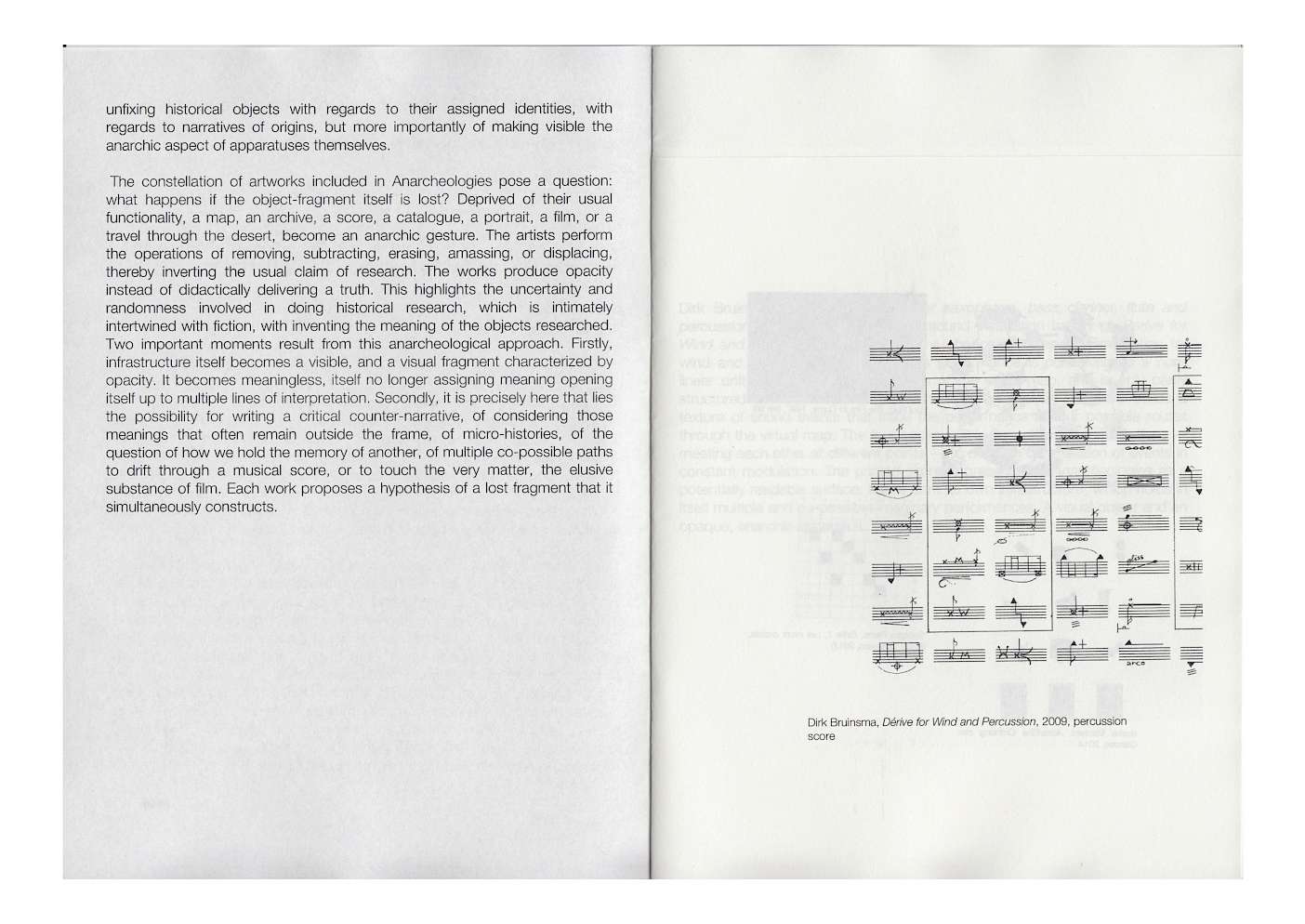 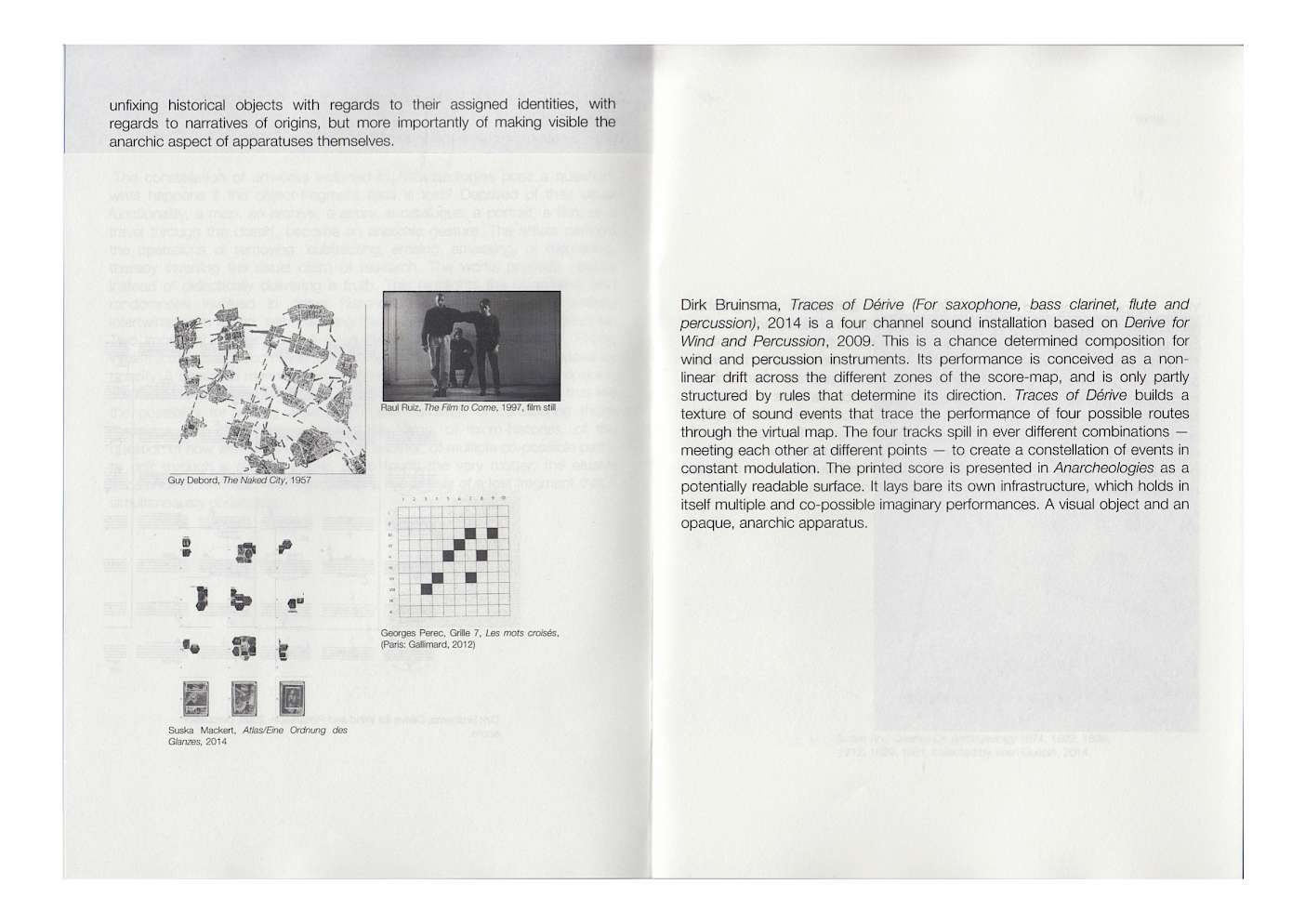 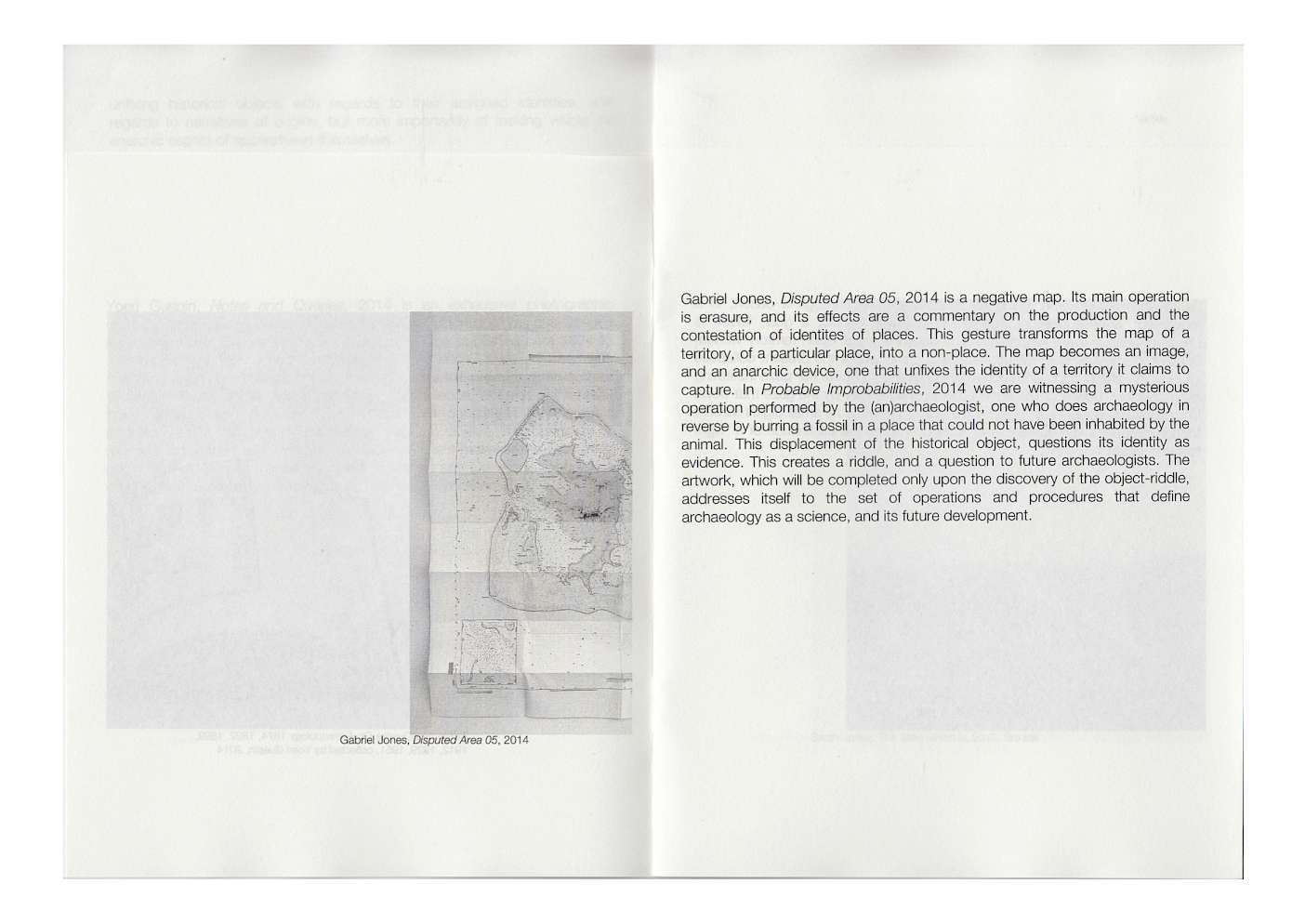 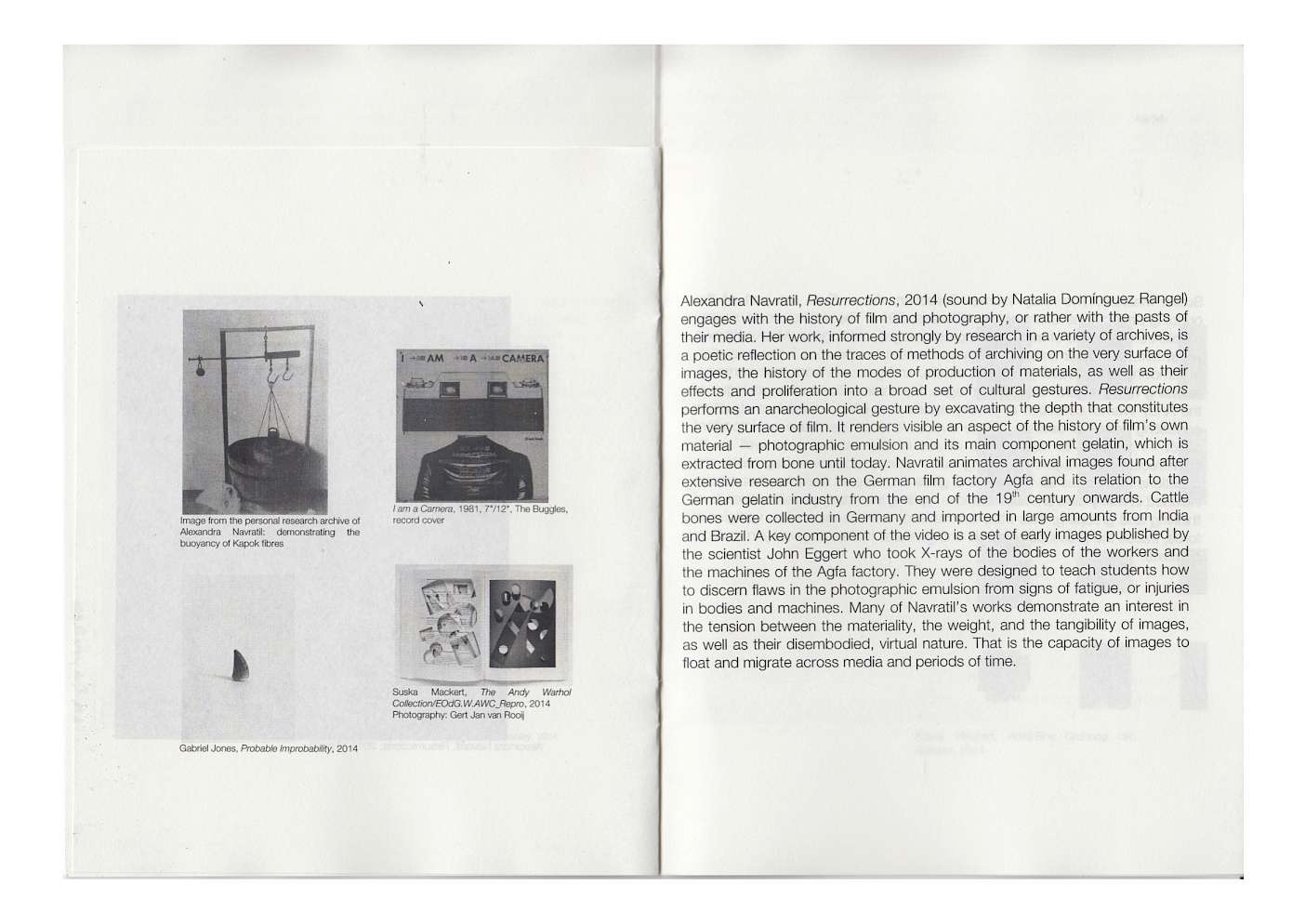 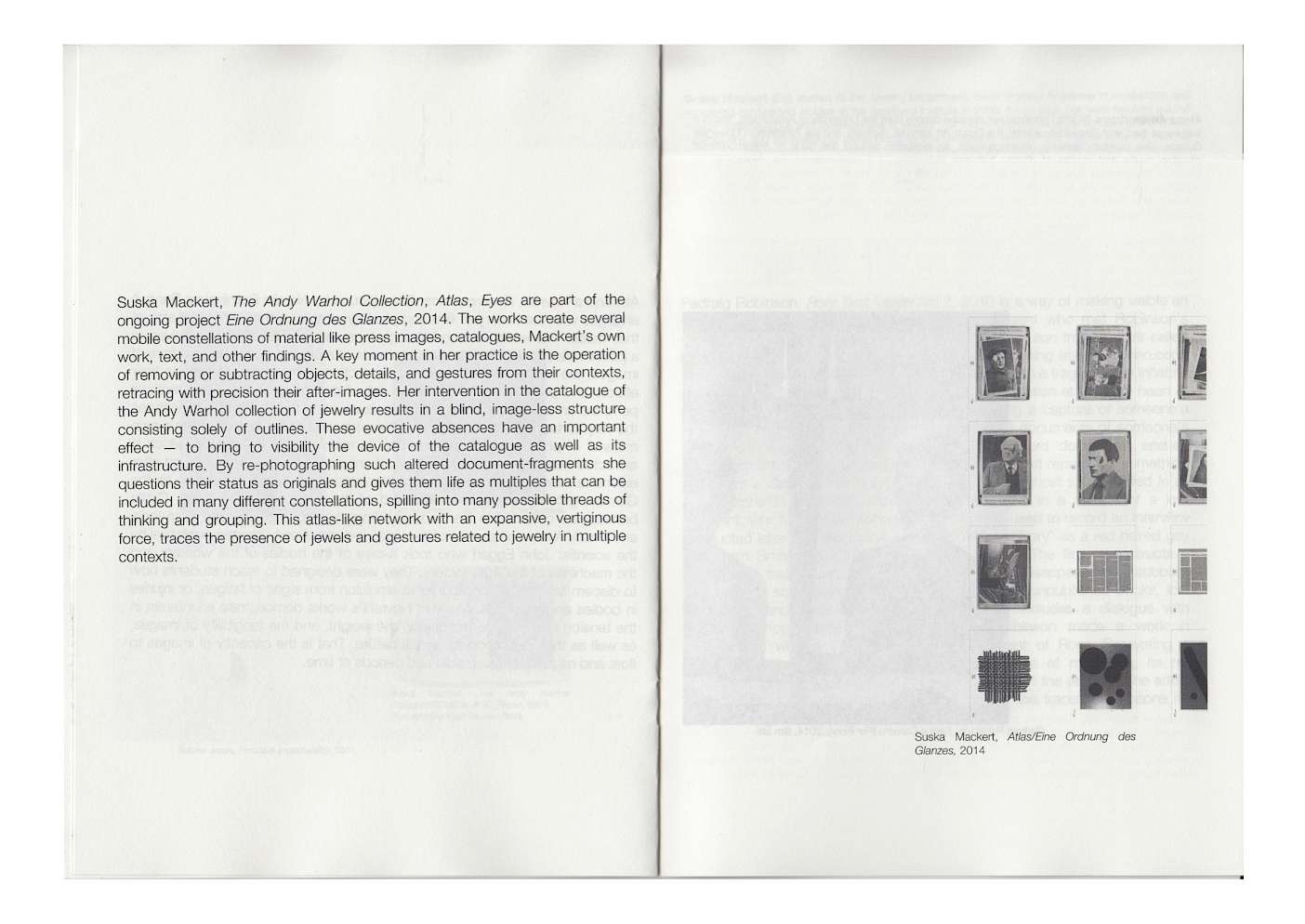 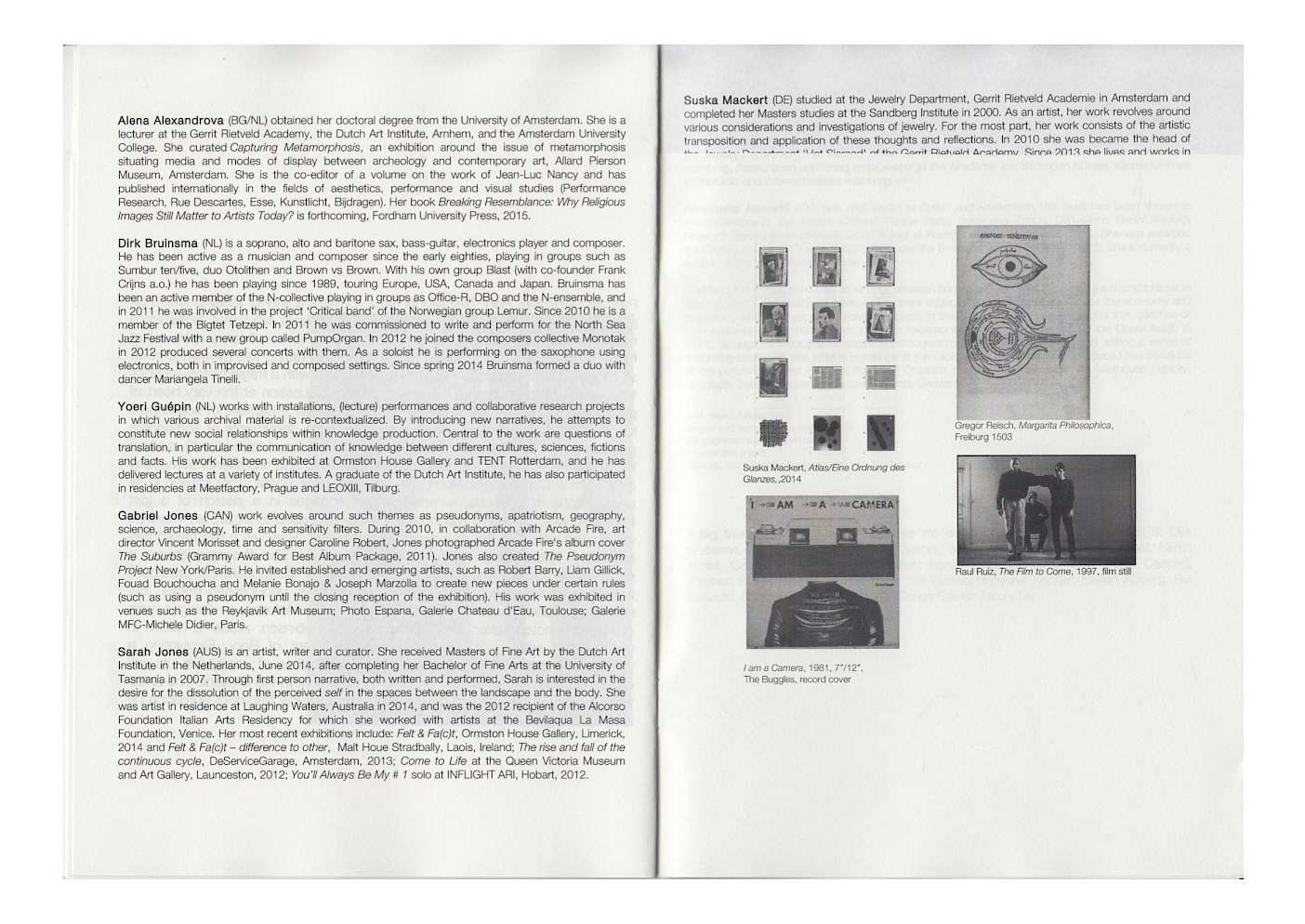 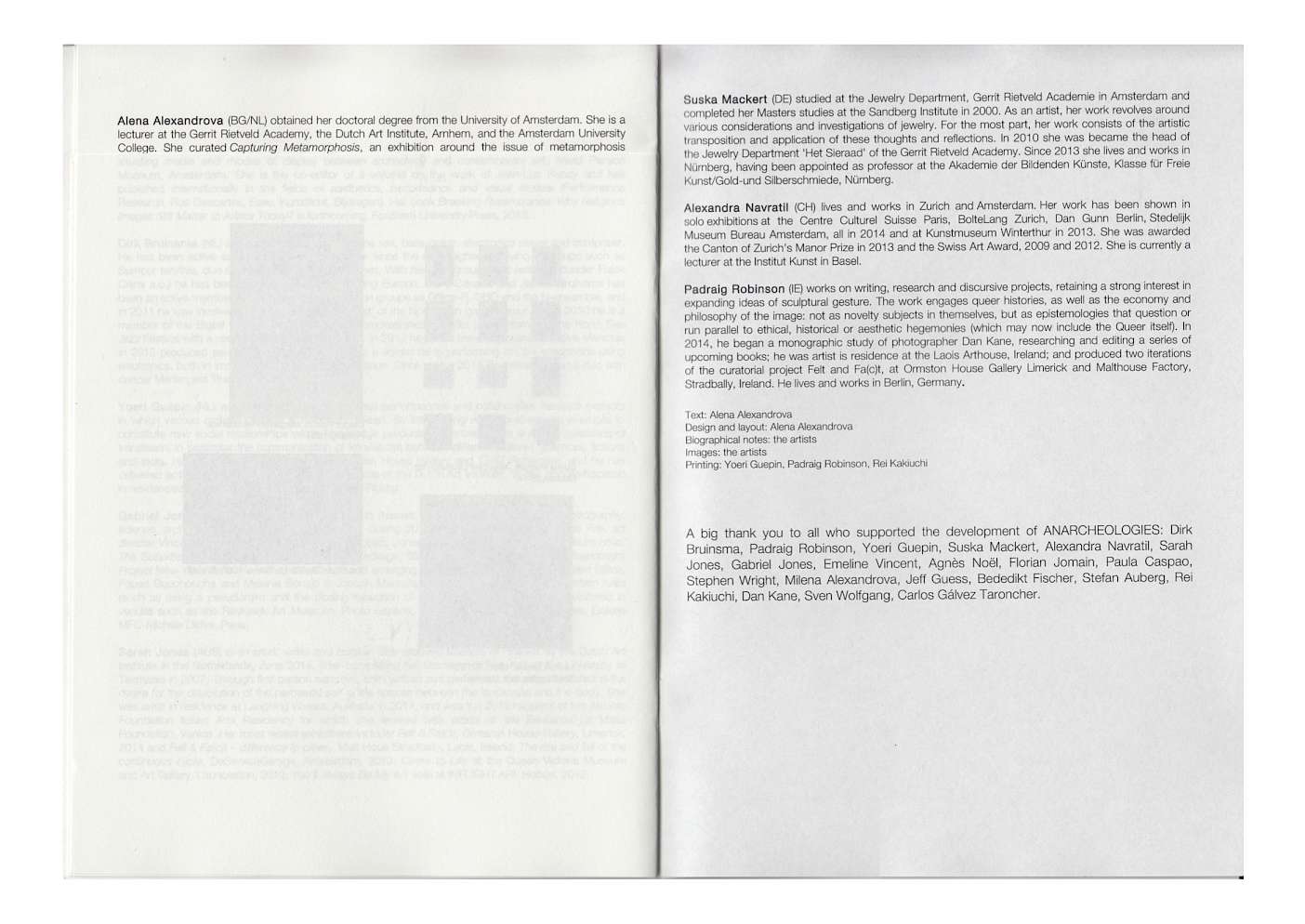 Objects often have a fragmentary nature. In many cases they are torn from their past and their context and are transformed into figures that assign them with identities and promise of knowledge. Archives, collections, catalogues, maps, technical gestures and scientific vocabularies, capture a variety of artifacts, images and territories. Archaeology is driven by the desire for understanding the past through recovering its fragments, and resurfaces in contemporary art practices as a trope and an open model. Artists mimic and displace its operations to question the construction of historical narratives and the complex positioning of objects in time — their fundamental anachronicity.

The inherent freedom, or openness of the artistic operation (historically speaking a relatively recent feature) opens a space for an anarchic gesture. Where ‘anarchic’ is not understood in a directly political sense, but as recovering and recapturing the inherent undecidability of archives and media. This also includes in a broad sense, devices of capture whose infrastructures constitute the background, which both invents and guarantees the truth status of objects. Such infrastructures are carefully negotiated fictions, the result of highly mediated procedures of interpretation. The architecture of the archive, the frame, the camera, or the musical score articulate visibilities or sound events, while themselves remaining invisible or overlooked. Anarcheology, then, engages with the multiple meaningfulness of infrastructures by transforming them into visual objects. This not only opens a possibility of unfixing historical objects with regards to their assigned identities, with regards to narratives of origins, but more importantly of making visible the anarchic aspect of apparatuses themselves.

The constellation of artworks included in Anarcheologies pose a question: what happens if the object-fragment itself is lost? Deprived of their usual functionality, a map, an archive, a score, a catalogue, a portrait, a film, or a travel through the desert, become an anarchic gesture. The artists perform the operations of removing, subtracting, erasing, amassing, or displacing, thereby inverting the usual claim of research. The works produce opacity instead of didactically delivering a truth. This highlights the uncertainty and randomness involved in doing historical research, which is intimately intertwined with fiction, with inventing the meaning of the objects researched. Two important moments result from this anarcheological approach. Firstly, infrastructure itself becomes a visible, and a visual fragment characterized by opacity. It becomes meaningless, itself no longer assigning meaning opening itself up to multiple lines of interpretation. Secondly, it is precisely here that lies the possibility for writing a critical counter-narrative, of considering those meanings that often remain outside the frame, of micro-histories, of the question of how we hold the memory of another, of multiple co-possible paths to drift through a musical score, or to touch the very matter, the elusive substance of film. Each work proposes a hypothesis of a lost fragment that it simultaneously constructs. 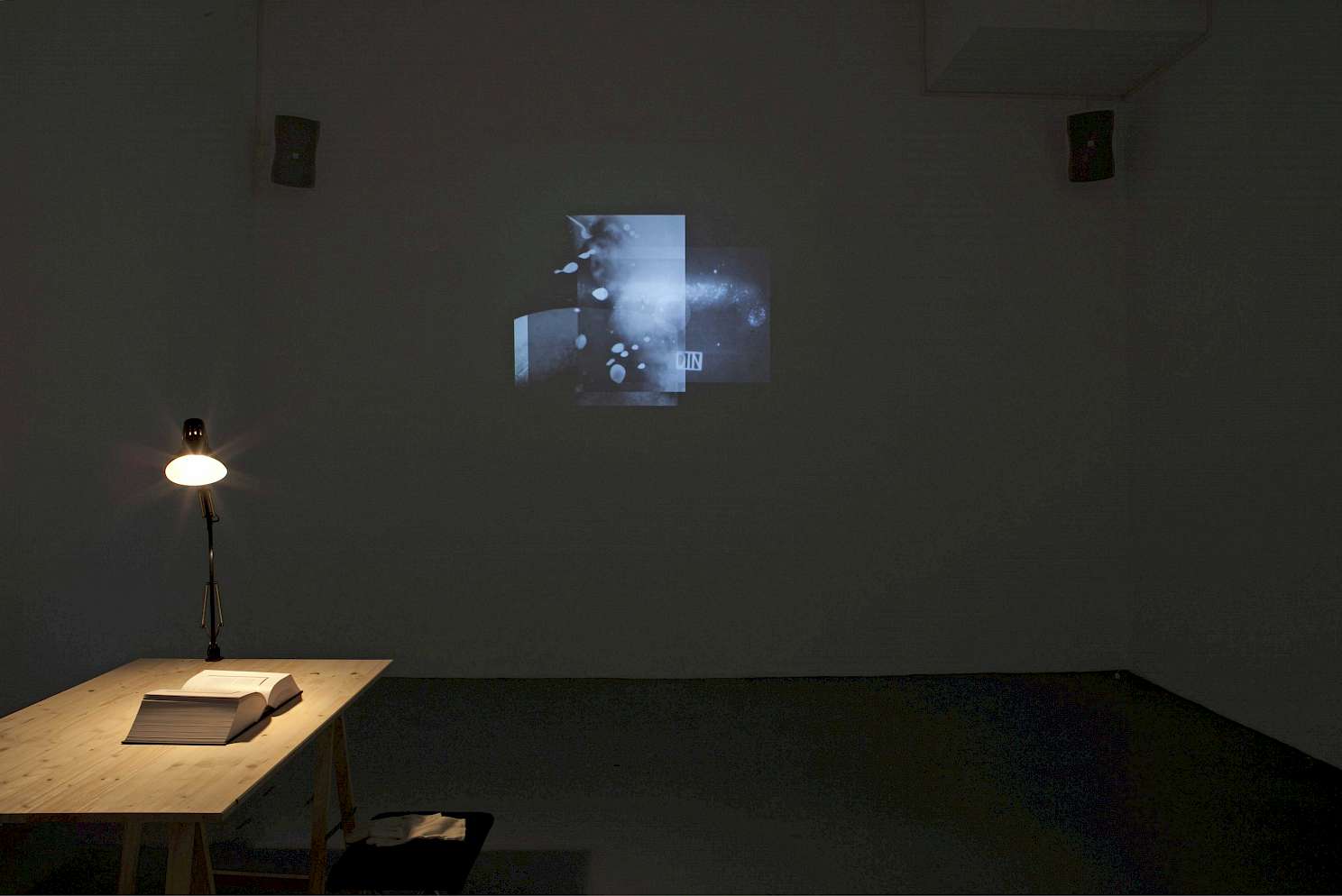 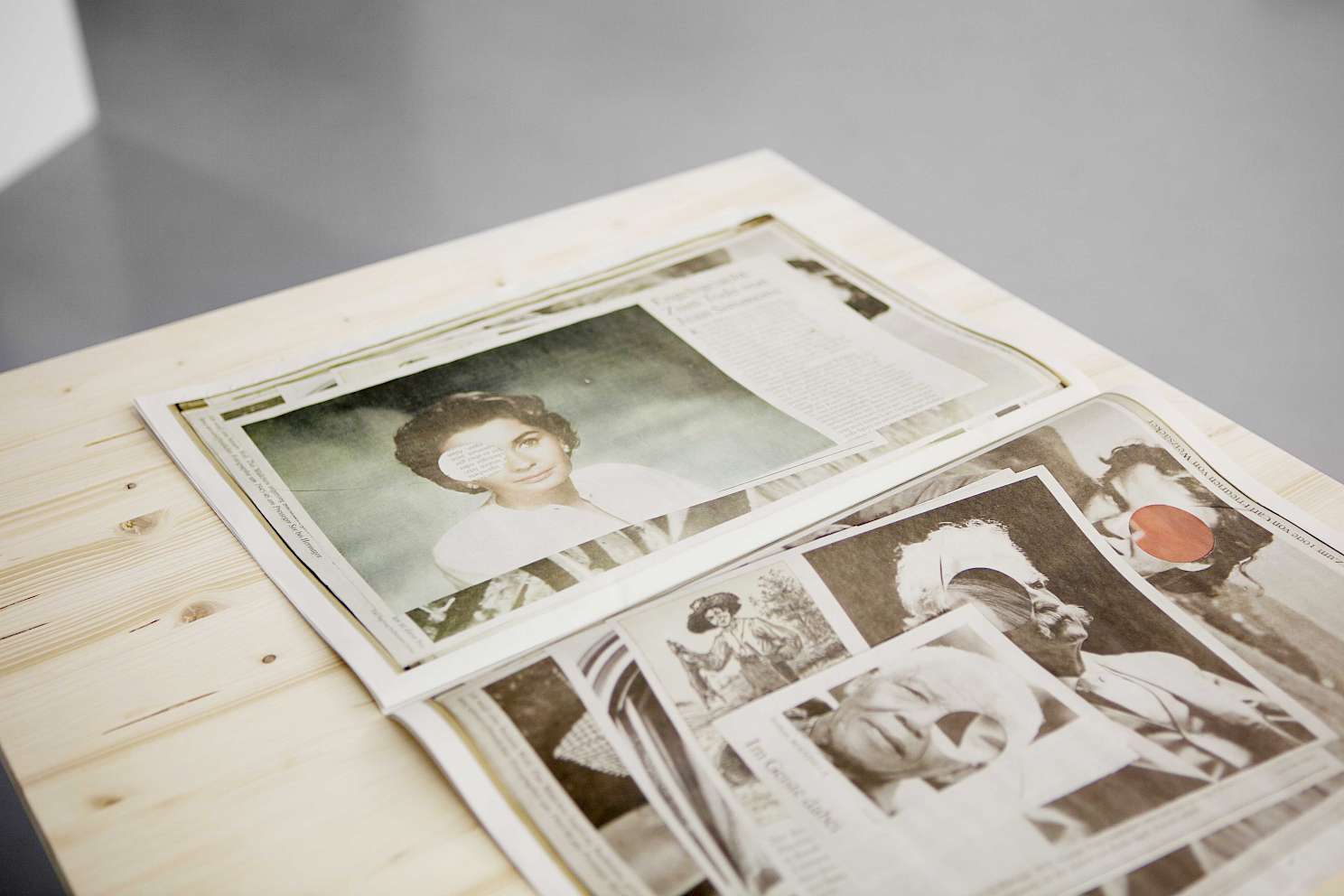